The Drinking Around The World Epcot Challenge…with kids!?

Are we crazy for trying to complete this challenge on a family trip to Epcot? Let's find out
March 23, 2017

Built in 1982, Epcot is the theme park that I have dreamed of visiting my entire childhood. I have always been fascinated with the world, constantly day dreaming about the countries I longed to visit in real life. It is no wonder that I would grow up to be a travel addict, taking my kids along for the global ride. So, a park that celebrates humans, innovation and culture, felt like it was made for someone like me. A permanent world fair where one can travel the world in a single day…or drink around the world, as I did. Yes, visiting Epcot as an adult has its advantages. With my kids in tow and a full belly, I was ready to take on 11 countries in The Drinking Around The World Epcot Challenge.

Anything Disney is expensive. There really isn’t many ways to get around it; however there are ways to save a little.

Single day tickets can vary depending on park and time of year. Since we had just come off a Disney Cruise, which you can read about HERE and our kids weren’t exactly feeling their best, we just visited one park for one day. We chose Epcot and it cost us about $600 for our family of six. Ouch, right? But honestly, nobody does it like Disney and this has been on my bucket list for a very long time. Check!


Chug-A-Lug (around the world)

Epcot actually has two sections, the Future World and the World Showcase. I was only visiting for one day, so I bypassed Future World. I only had eyes and thirst for the 11 themed nations that make up the World Showcase. Like any champion, I did my research. I watched Chez Lindsay and friends complete the challenge in 2016, which not only inspired me, but also made me laugh…a lot. I also enjoyed Shaun Thompson’s and Rebecca Dolan’s guides to drinking in Epcot. Needless to say, I felt darn prepared for my day of drinking. Luckily, I have had a lot of practice. 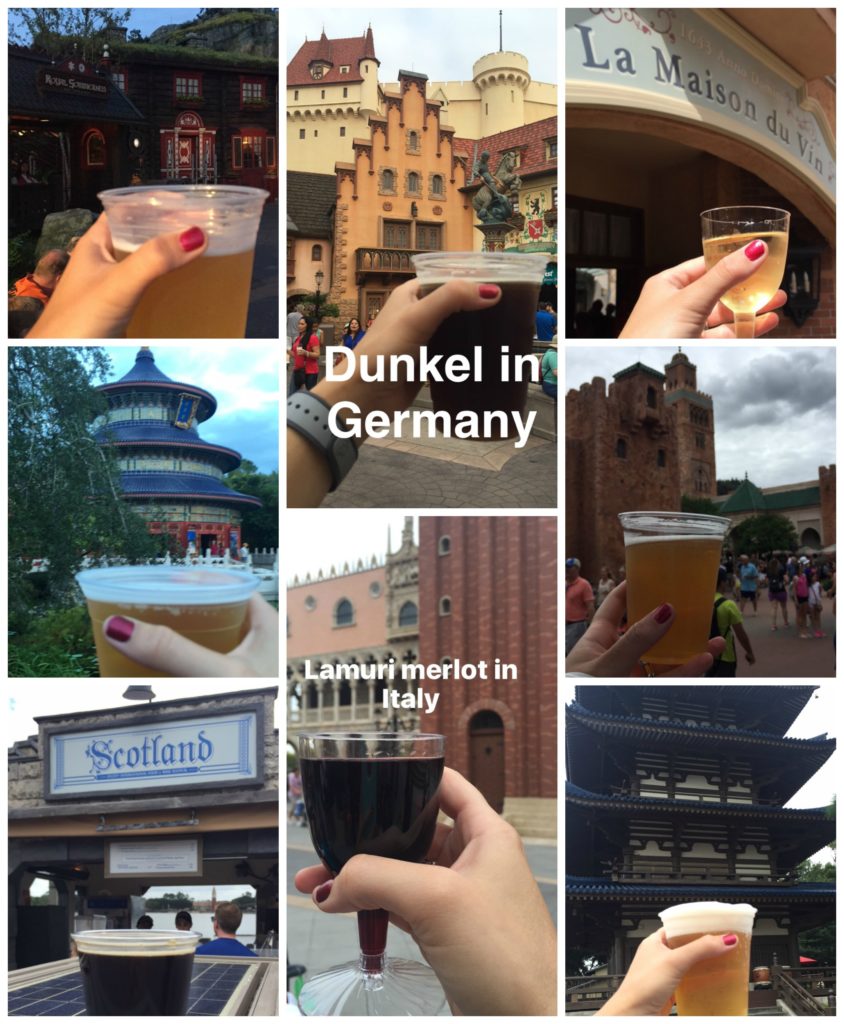 With a walkable scenic 1.2 miles of global fun, the 11 themed pavilions feature architecture, shops, attractions, entertainment restaurants, beers, wines and spirits to bring these countries to life. Adding the authenticity, each represented nation is staffed with citizens from that country, thanks to the Cultural Representative Program. Originally, the nations in Epcot were supposed to be a direct partnership with actual international governments. However, the only pavilion sponsored by the government of its country is Morocco.

HotMamaTip: For the Kids!
As you are jet setting around the world collecting liquid souvenirs, the kids can be collecting Epcot passport stamps. Before you get started, stop by the World Traveler International Gateway to purchase your Epcot Passport. It cost $10, but it comes with stickers and a pin. It makes for a fun personalized souvenir. Once you have your Epcot Passport, be sure to find the Kidcot Fun Stop in each country. There, kids not only get their passport stamped, but they do a fun craft representative of the country. 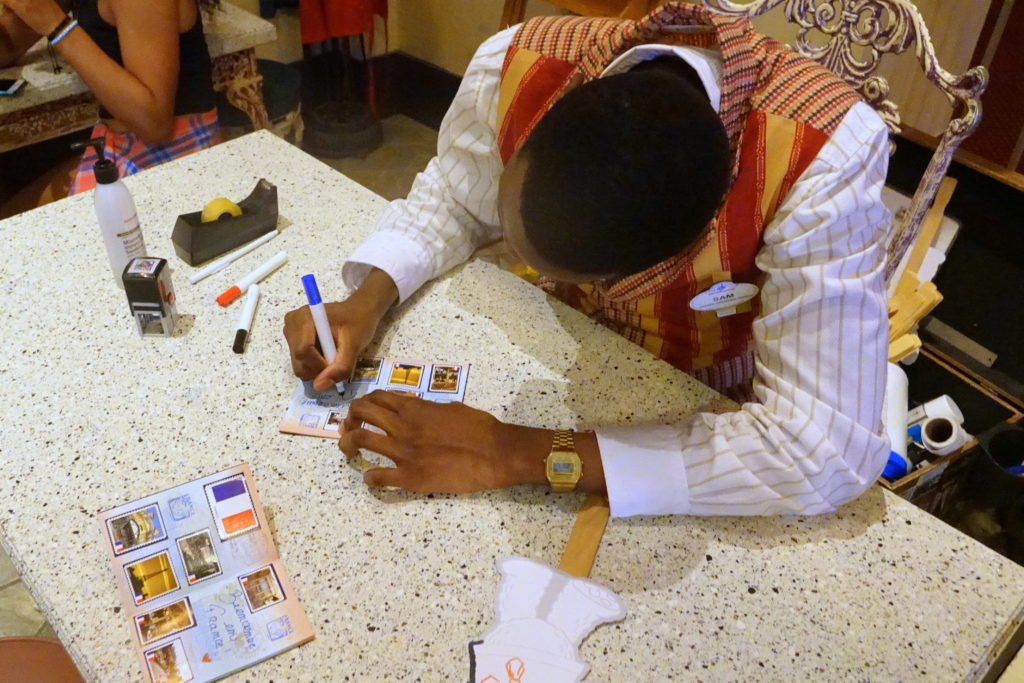 Canada was our first country of the day. After a tram ride, a ticket line and Florida heat, all I wanted was a drink! I have to admit I was a little impatient at this point and went with something that sounded Canadian and fun. So, I went with the Apple ice wine from Quebec. Honestly, it was a little sweet for me. I should have gone with the Moosehead Lager instead. 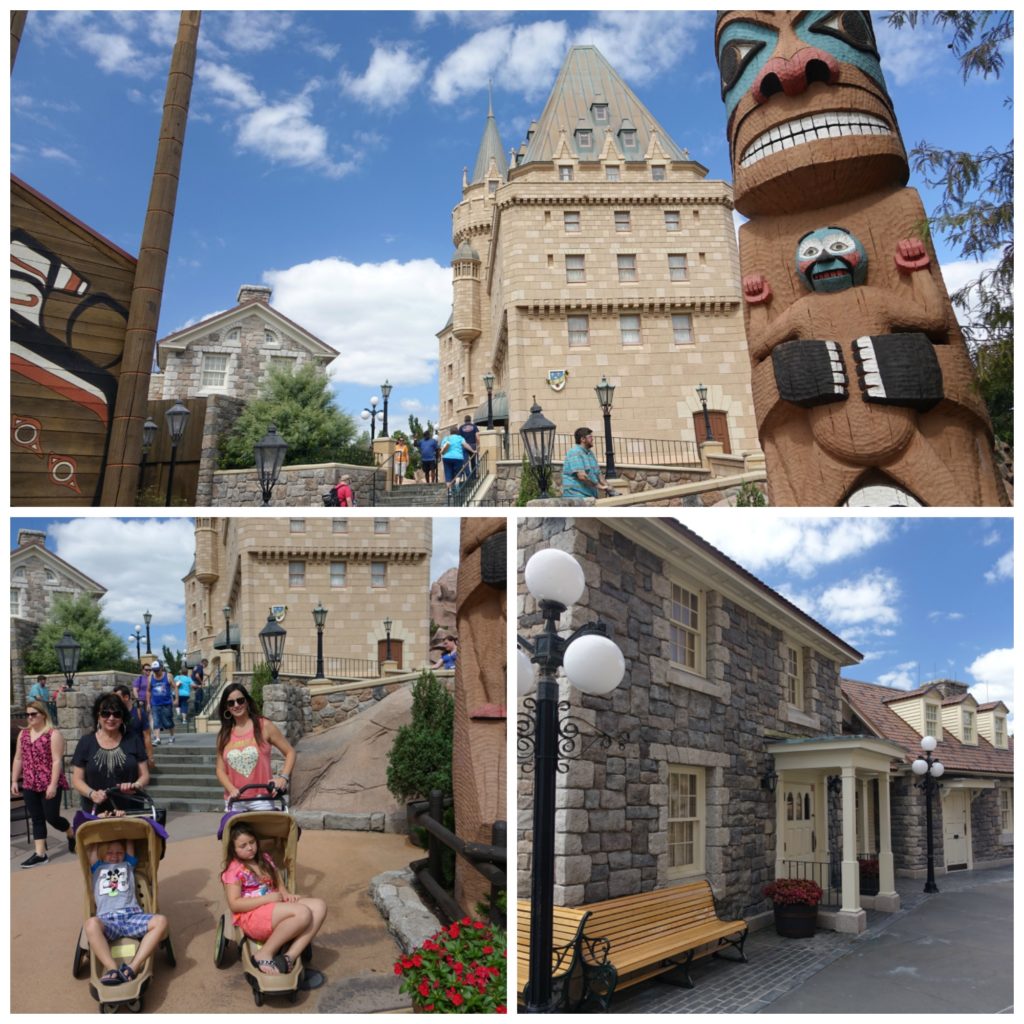 The next stop on the circle was the United Kingdom. I really loved this pavilion. For one, I love the United Kingdom. Two, it is my heritage. Three, I had just arrived home from Scotland and it brought back good memories. Obviously, we hit the pub and obviously had more than one beer here. I had an Innis & Gunn, which I was excited to find for the first time in the U.S. 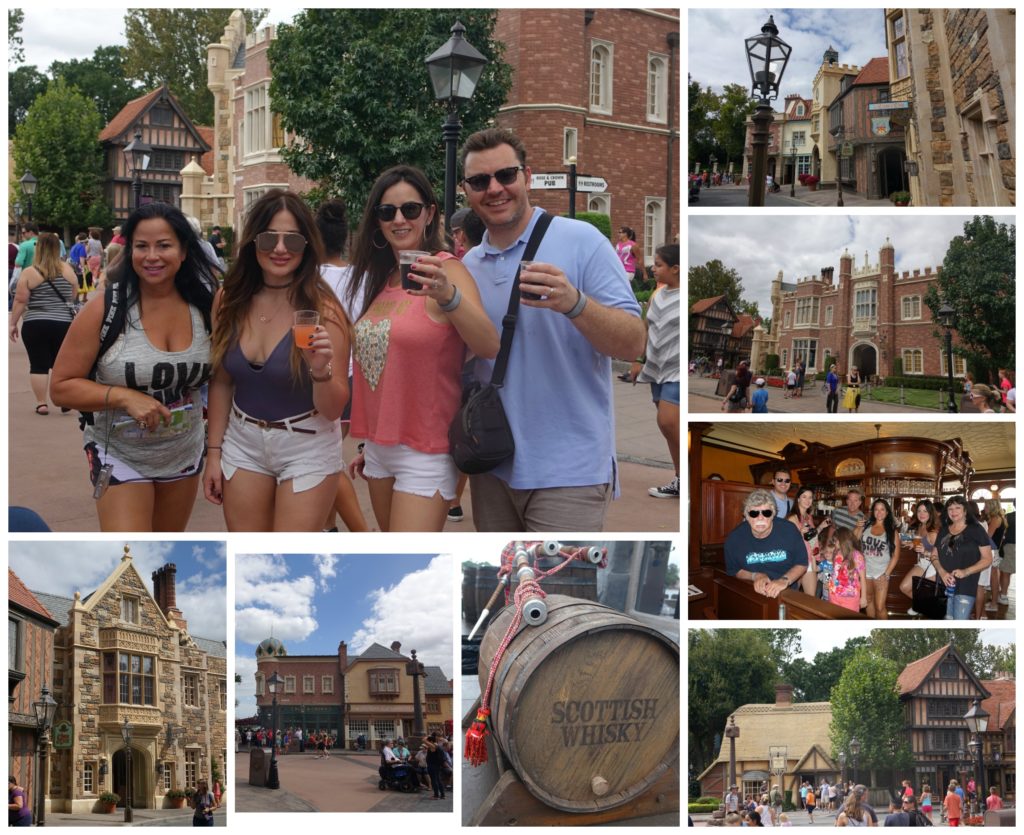 Oh-la-la we were in Paris! With the Eiffel Tower rising above us we hit the cellar. While my kids (and hubby) enjoyed ice cream, Grams and I sip liquid treats. I went for Pouilly-Fuisse Chardonnay while Grams went for Kronenbourg 1664 Blanc. 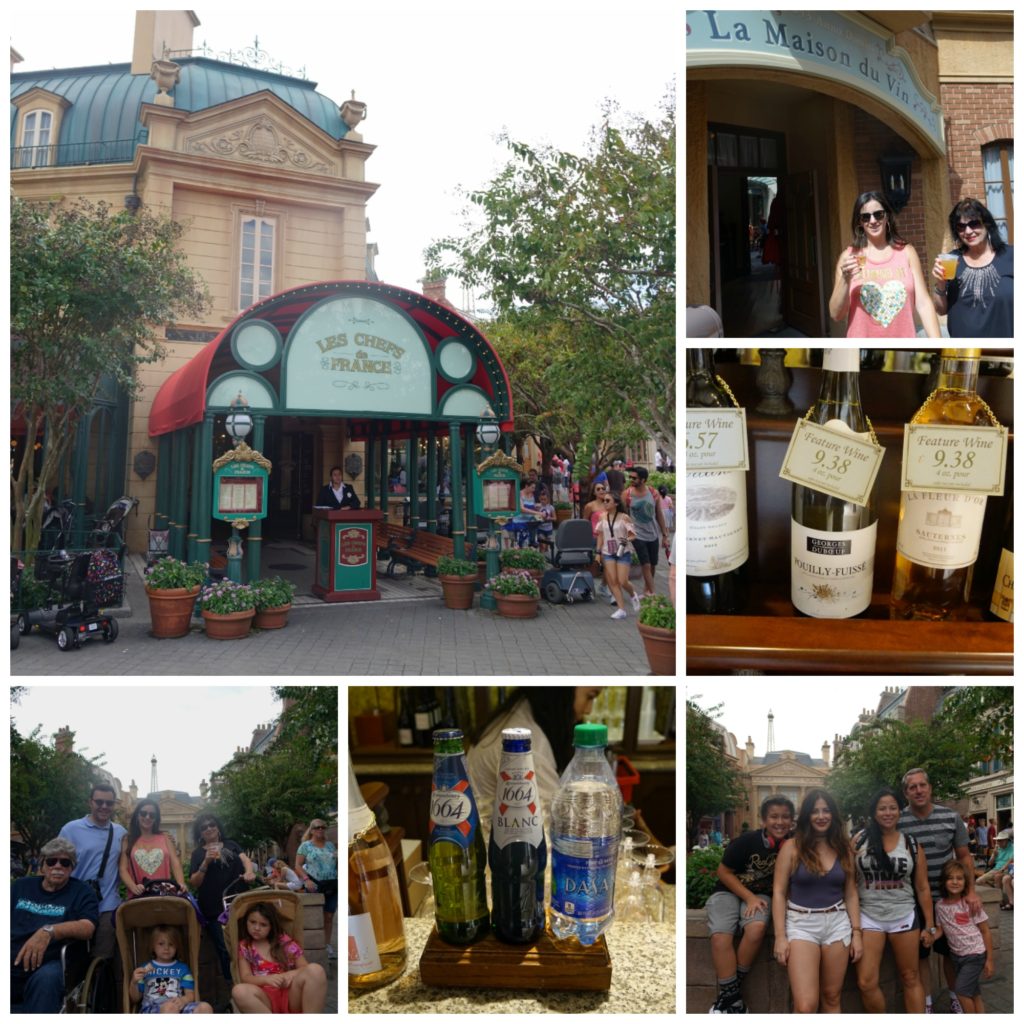 I can’t tell you how excited I was to arrive in Morocco! The architecture was amazing and it truly made you feel like you just arrived to an exotic destination. Although I was hungry and really wanted to eat in Morocco, I had to grab my drink first. At this point everyone was arguing about where we were going to eat; a common issue while traveling with a large group. Since I wasn’t sure when or where we were going to get food, I decided to stick with the drink I know and can handle well: Beer! In Morocco, that was Casa Beer to be exact. 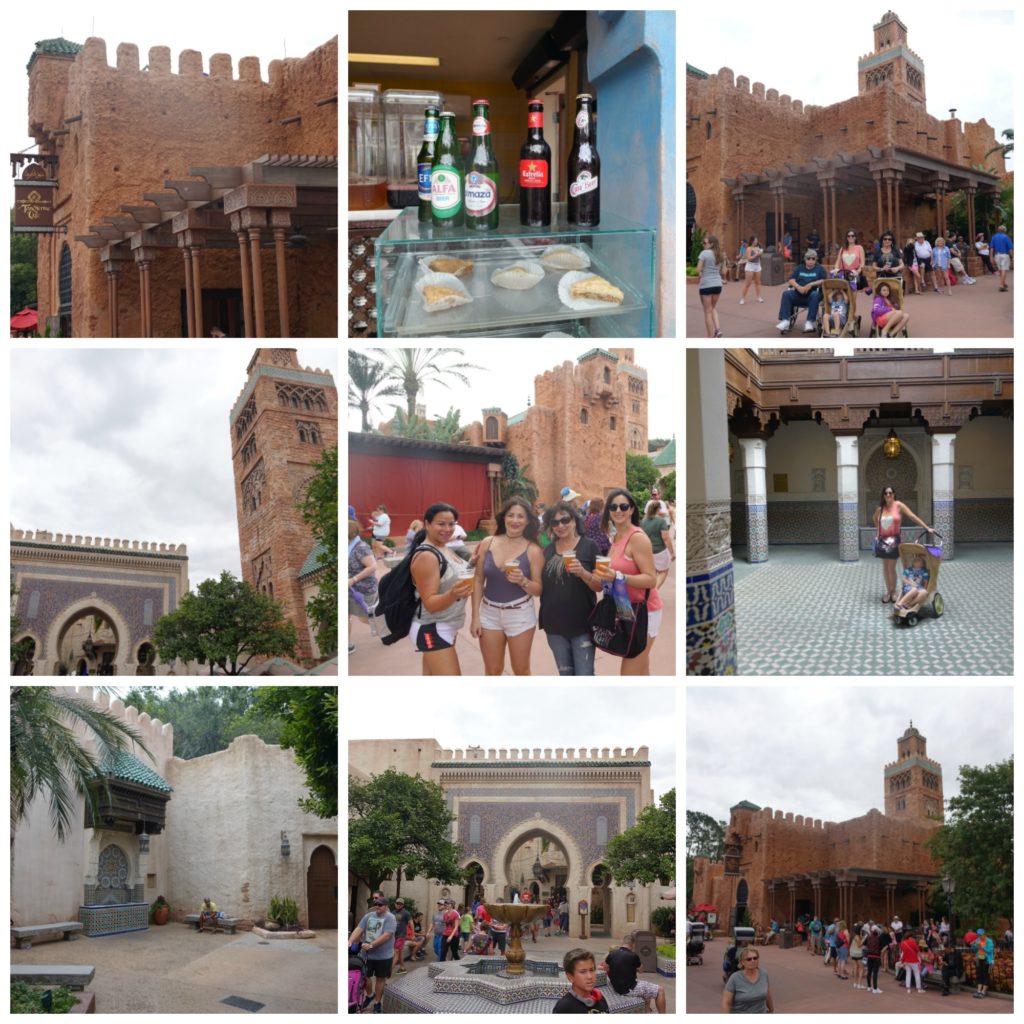 After our beers, our group could not come to agreement on eats, so we decided to split and catch up later. Papa, Grams, HotDaddy, the kids and I stayed in Morocco and ate at Marrakesh. What a great choice too! We had delicious food & drink while being entertained with belly dancing and music. 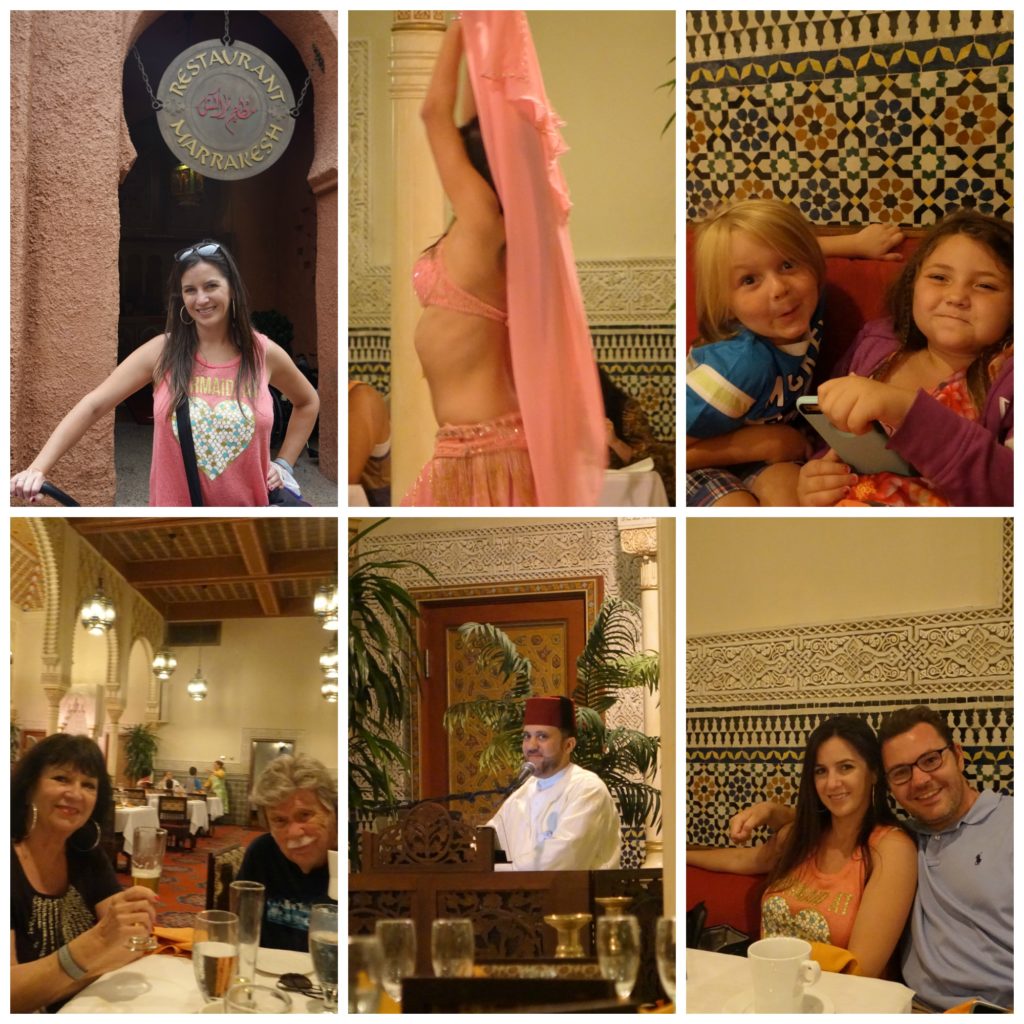 Next up was Japan. This area was lovely and peaceful. I really wanted to get some sake, but after a few beers now, I didn’t want to push it. So, I went a refreshing frozen Kirin. Next time, I would like to hit up the sake bar though! 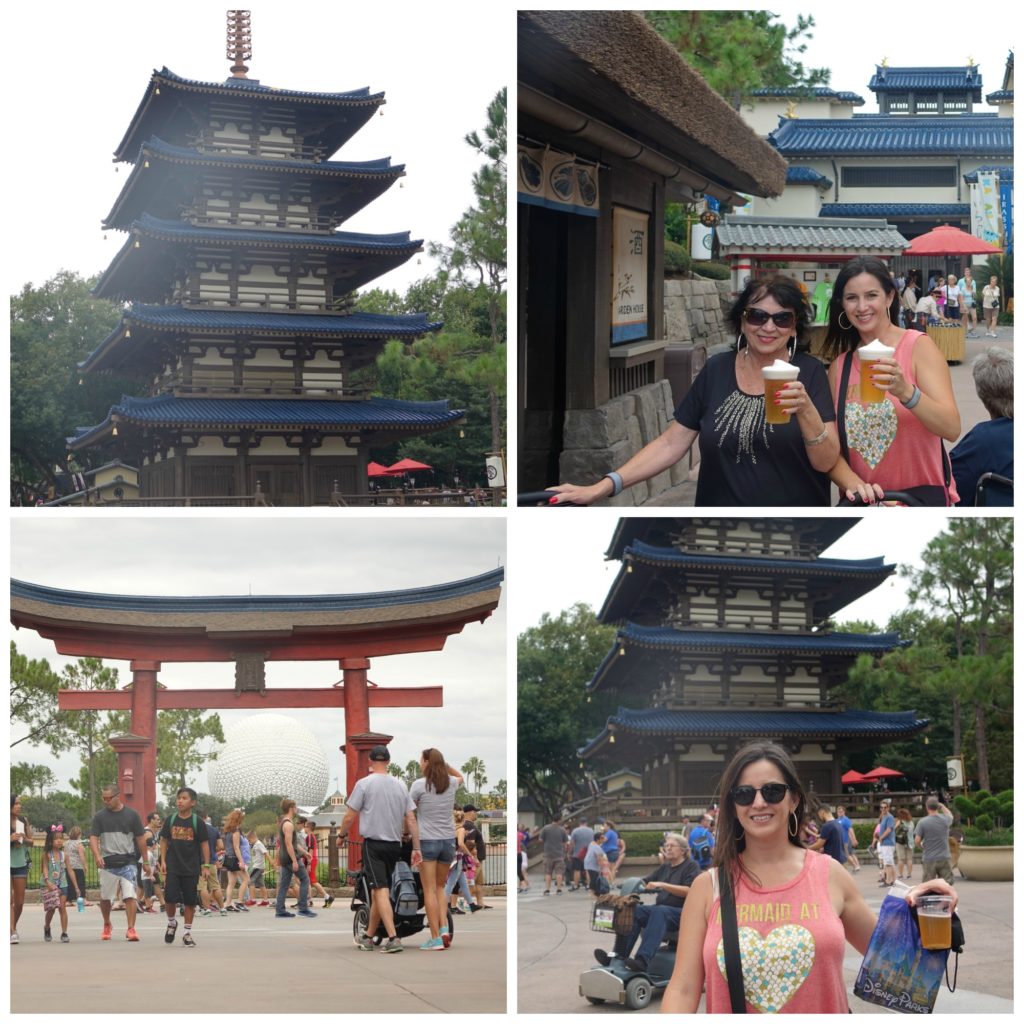 America was very festive, lot of music and entertainment going on here. However, I am American and I was already drinking more than one drink in each country. So, we just let the kids do their craft and get their stamps, bypassing drinks here. 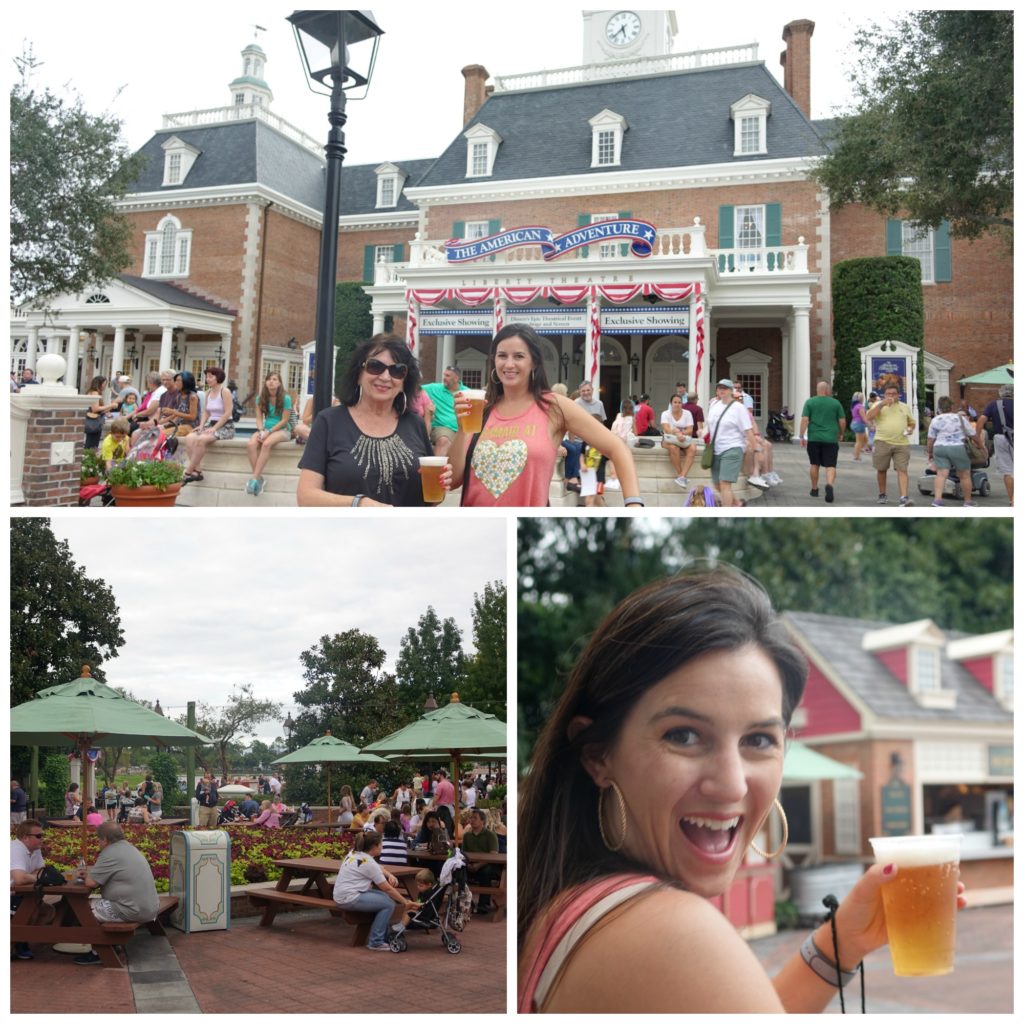 Italy was beautiful, insistently taking one to Venice. I really could have spent more time here, but I did make time for a glass of wine. I went for a red this time, because just felt more Italian. We just took our time enjoying the view of the gondolas in the water and taste of my vino. 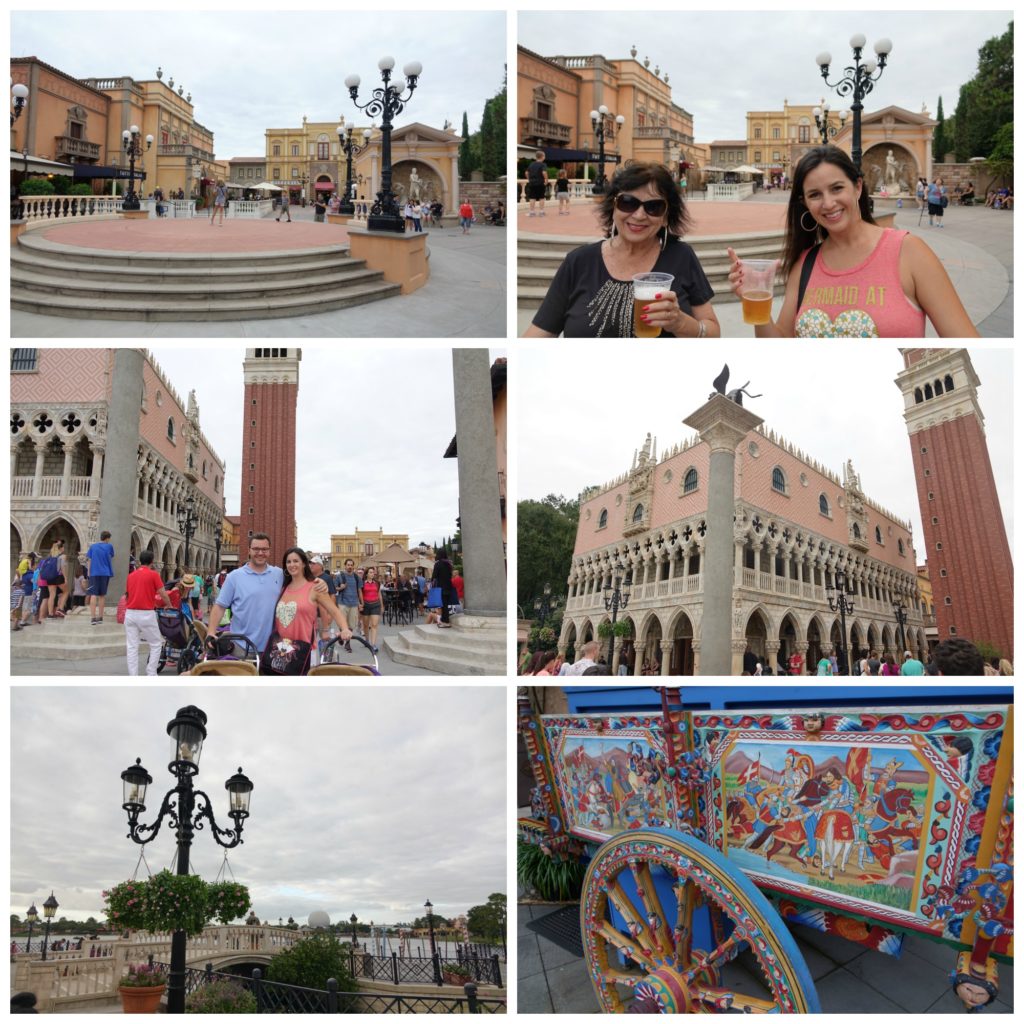 Germany was super charming. Seriously like a fairy-tale. Since my hubby had been to Germany before, he was super excited to see Dunkelweizen. He lived off of this in Germany, so naturally we shared a pint. 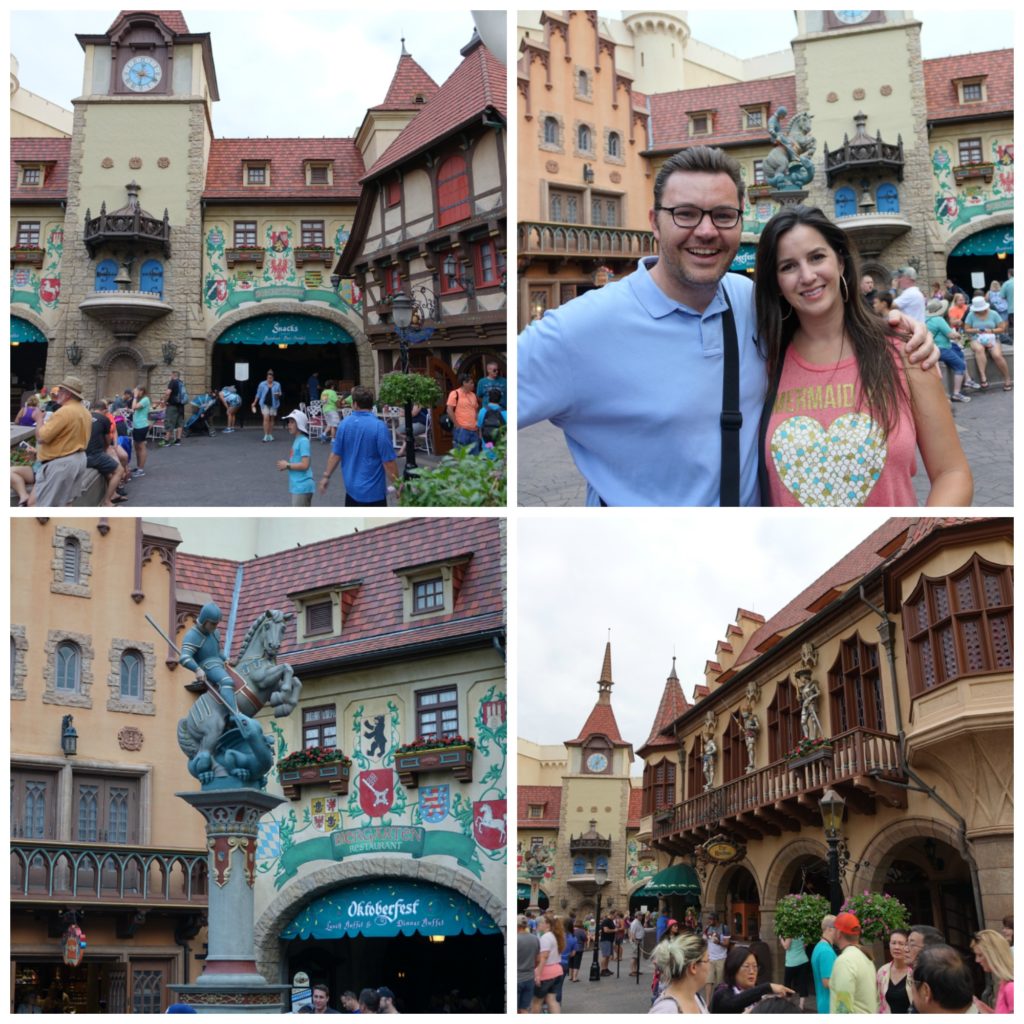 Oh how the food smelled so good when we approached China. I could have eaten again for sure. I mean who can’t make room for Chinese food? Unfortunately we didn’t have time, but we did stop to explore and have a Tsingtao beer. Love this beer. Have you had it? 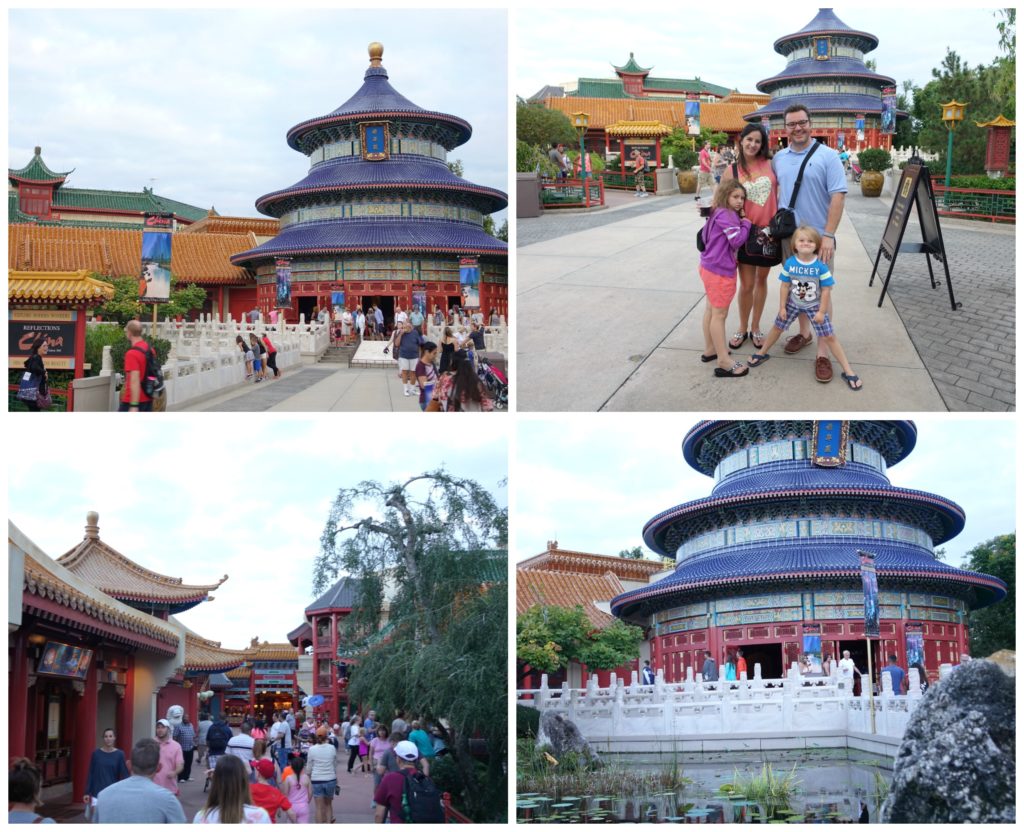 Love love love the architecture and streetscape of Norway, but I was disappointed in the drink selection. They literally had no Norwegian beer in Norway! They did have other Scandinavian beers, but not Norwegian. I had a challenge to complete, so I drank an Icelandic Pale Ale instead. 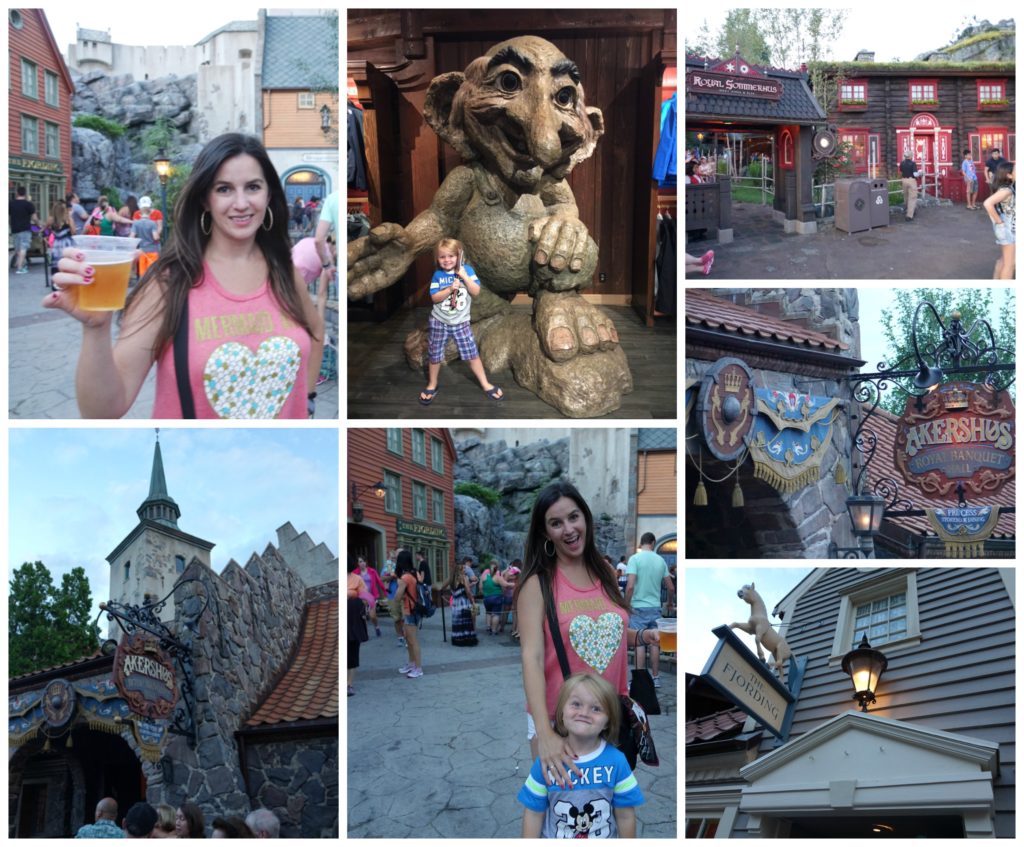 Not only am I American, I am Californian. So, Mexico pretty much feels like home too. I love Mexican beers and although I drink them all the time, it was the last country of the day. So, I finished my day off with a Corona and called it a night! 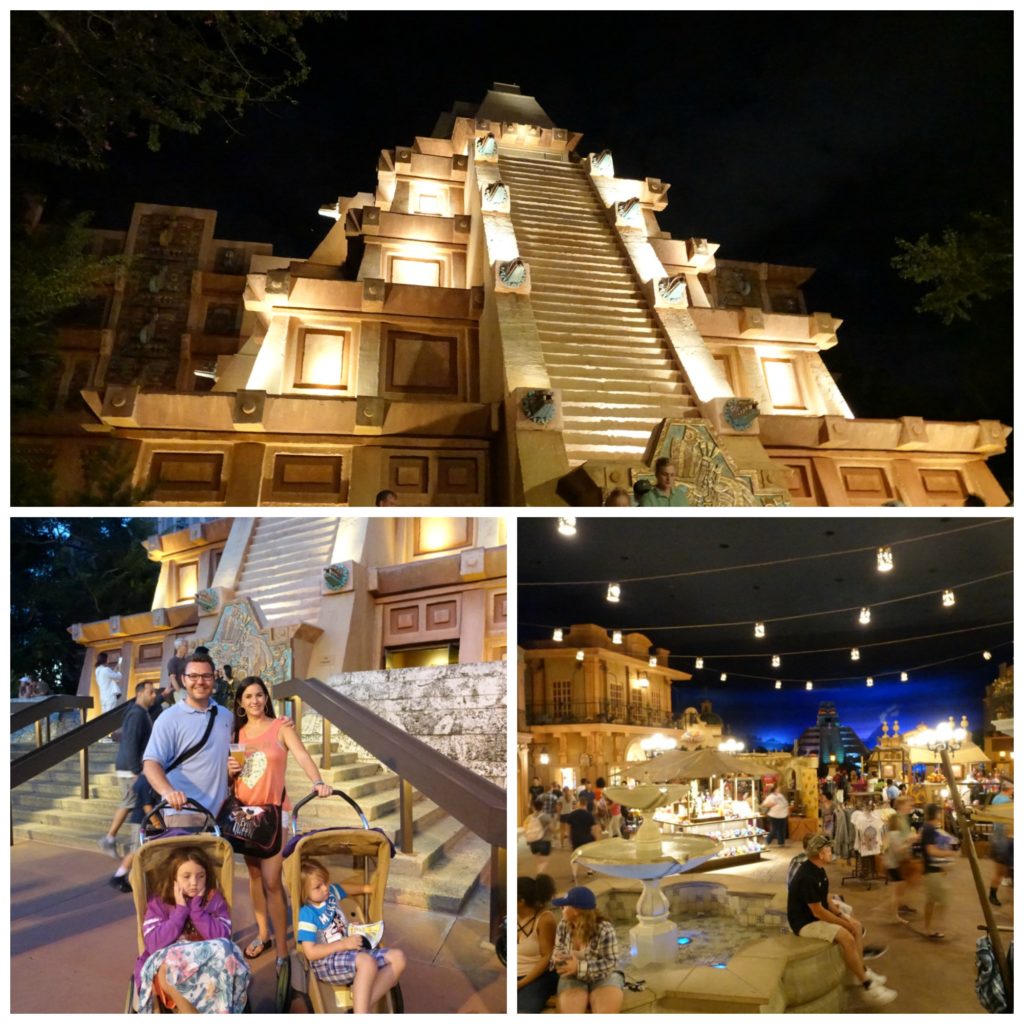 I know what you are all wondering. Was I toasted? Done? A sloppy-tini? Surprisingly, no. No stranger to drinking, I drank tons of water, tried to eat here and there and walked it off. I also didn’t mix in spirits. Instead, I stuck with beer and wine and I was fine. I really didn’t feel anything except happiness mixed with exhaustion. The hardest part of The Drink Around The World Epcot Challenge was having enough time in one day. I felt kind of rushed, but I was traveling with a large group and kids. So, that slows you down. BUT…I did it and I would do it again. 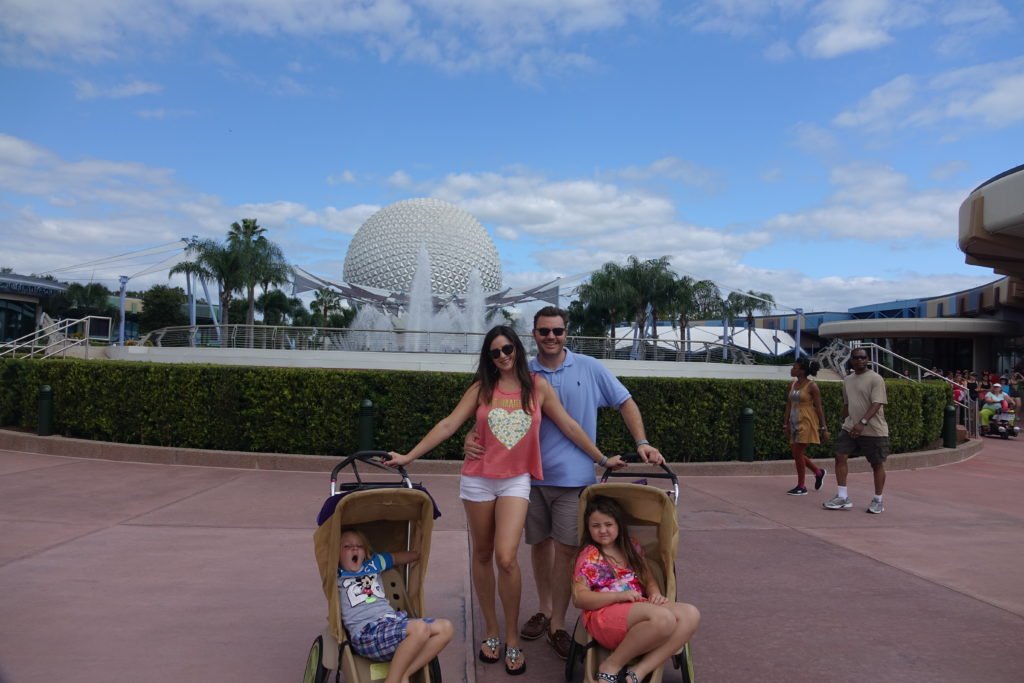 Are you down to take the Epcot Challenge? 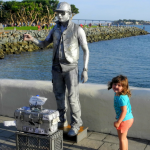 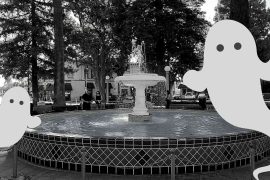 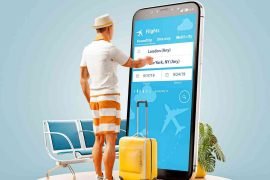 Basic Travel Apps Everyone Must Have 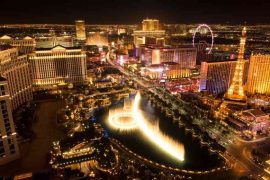 Ultimate Guide to Walking the Las Vegas Strip with Kids